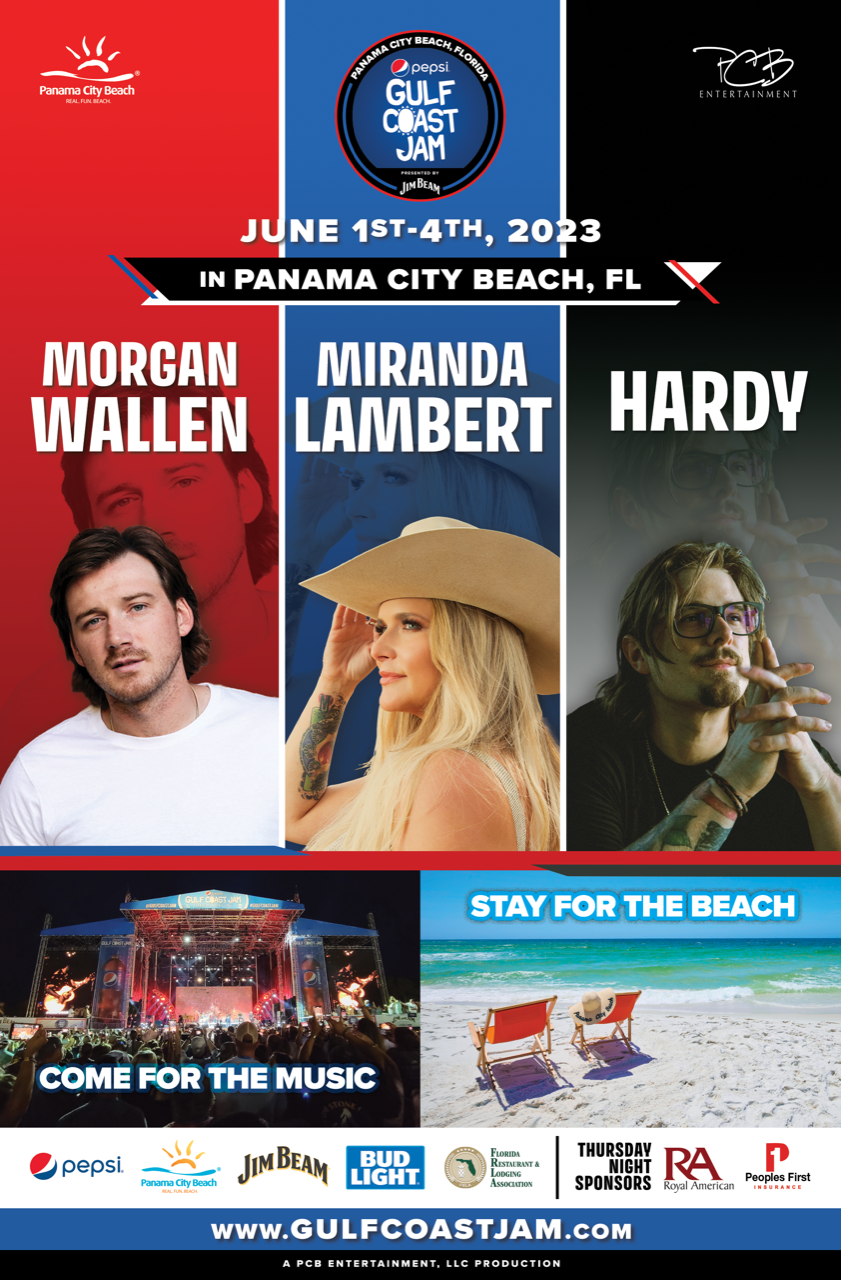 Joins Previously Announced Headliners Morgan Wallen & Miranda Lambert June 1-4, 2023 in Panama City Beach Big Loud Records’ game-changer HARDY will bring his electric headline live show to the Florida Panhandle, when he joins Morgan Wallen and Miranda Lambert as the third of four headliners at the 11th Annual Pepsi Gulf Coast Jam Presented by Jim Beam. Organizers announced the exciting news today on the festival’s Facebook. Scheduled for June 1-4, 2023 at Frank Brown Park in beautiful Panama City Beach, tickets for next year’s festival are currently available at GulfCoastJam.com. “My publicist won’t allow me to cuss to express how excited we are about how this lineup is coming together,” said Executive Producer Rendy Lovelady. “We’ve already sold more tickets – way more tickets – than any year this far out from the festival, and I can’t wait to see what happens when our Jammers hear about HARDY and the rest of our lineup!” Sky Boxes, Side Stage, Super VIP, and all parking passes are already sold out for 2023, and a limited number of VIP Pit passes are still available. Ticket prices are set to increase on Friday, October 7.Organizers are encouraging attendees to purchase passes and book accommodations as soon as possible. “We’re incredibly excited about the addition of HARDY to this already amazing lineup,” said Pepsi Gulf Coast Jam COO Mark Sheldon. “We are also tempering this exciting news and the incredible response we’re having to next year’s festival with the fact that many of our friends and neighbors are dealing with aftermath of this awful hurricane.” Listed by Billboard as one of “The 10 Best Country Music Festivals,” the Pepsi Gulf Coast Jam Presented by Jim Beam is the largest music event in the southeast. Organizers added an extra day this year to commemorate the festival’s 10-year anniversary. The fourth day was such a success, the decision was made to make the additional day a permanent part of the schedule. Jammers are encouraged to follow Pepsi Gulf Coast Jam Presented by Jim Beam at www.GulfCoastJam.com and on Facebook, Twitter and Instagram for special announcements about the Pepsi Gulf Coast Jam. #HARDY #mirandalambert #morganwallen #country #music #festival #panamacitybeach #florida #countrymusic #pepsi #visitpanamacitybeach #countryonthecoast #gulfcoastjam #letsgo #goodtimes #musicfestival #festlife ABOUT HARDY Big Loud Records’ heavy hitter HARDY broke out with critically acclaimed 2020 debut album, A ROCK, “an album that owes as much to AC/DC as George Jones” and “one of the most self-assured full-length debut albums in years” (Billboard). The project joins countrified mixtape HIXTAPE VOL. 1 and most-recent HIXTAPE VOL. 2, as well as career-launching EPs THIS OLE BOY and WHERE TO FIND ME. HARDY is the 2022 ACM Songwriter of the Year and two-time AIMP Songwriter of the Year, additionally nominated for New Artist of the Year at the 2021 CMA Awards. One of CRS’ 2021 New Faces of Country Music, a two-time CMA Triple Play award recipient and a Vevo DSCVR artist, the pride of Philadelphia, Miss. has earned his reputation as “a breakout in the making” (HITS). HARDY has written 12 #1 singles since 2018, including his own chart-topping, double platinum-certified single “ONE BEER” feat. Lauren Alaina + Devin Dawson, and chart-topping Dierks Bentley + BRELAND collaboration, “Beers On Me.” Serving as direct support on Morgan Wallen’s Dangerous Tour now, HARDY has also opened for Jason Aldean, FGL, Chris Lane, Thomas Rhett, Cole Swindell and more, and will embark on his SOLD OUT headlining Wall to Wall Tour this winter.