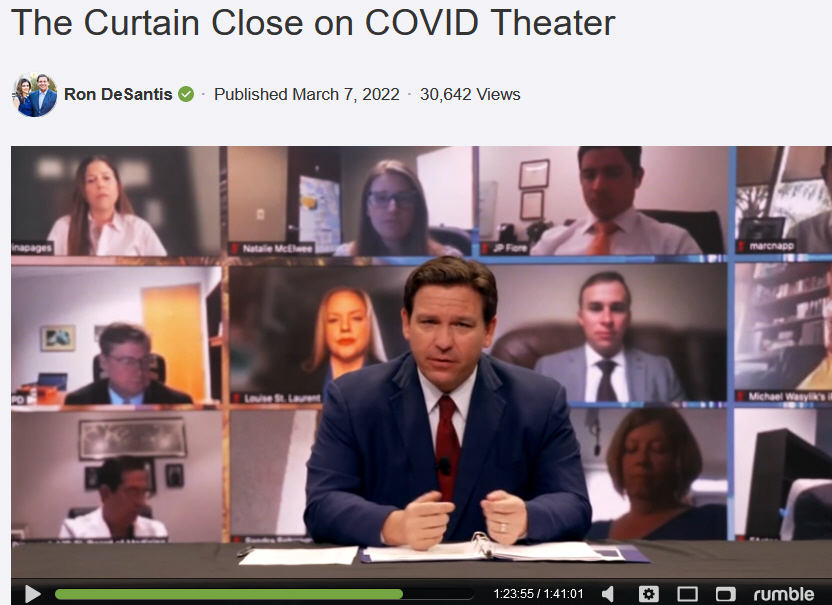 WEST PALM BEACH, Fla. – Today, Governor Ron DeSantis was joined by Surgeon General Dr. Joseph Ladapo and world-renowned physicians and epidemiologists to discuss the failures of lockdowns and mandates in response to COVID-19. Lockdown politicians and the medical establishment have continually ignored data, instead choosing to stoke fear and push for lockdowns and mask mandates in their fruitless attempts to “stop the spread.”

“Over the past two years, the data has shown us what works and what doesn’t work. It is long past time to stop the COVID Theater,” said Governor Ron DeSantis. “In Florida, we told the truth, we let the data drive our response, and we let Floridians make decisions for themselves and their children. As a result, Florida is in a better spot than states who used fear mongering and mandates.”

“Under the leadership of Governor DeSantis, Florida has continued to stay ahead of the federal government by following sound science – not coercion,” said Surgeon General Dr. Joseph Ladapo. “Today, we were able to bring doctors from around the world to discuss COVID-19 and the lack of data to support mandates. Scientific debate takes place in a public forum – it is not hidden in federal bureaucracy. We need to get back to living – not hiding in fear.”

“The lockdowns were an enormous catastrophic mistake that should never be repeated,” said Dr. Jay Bhattacharya, M.D., Ph.D., Professor of Health Policy, Stanford University Medical School. “When we think about lockdowns, we should recoil with horror because the policies we followed have violated not just medical ethics, but also crushed the ability for scientists to discuss openly with each other facts and evidence. It’s taken a great amount of effort and willingness to face abuse in order for scientists to speak up and many have been silenced. I think [we need] the restoration of the freedom for scientists to discuss with one another openly what the evidence actually says without fear of repression that we’ve seen during the pandemic in order to support the lockdowns. I think that the proper place of science in society needs to be restored so that scientists can advise, but not dictate policy.”

“There is no justification for mandating vaccines for children, full stop,” said Dr. Robert Malone, M.D. “We’re of the strong opinion that if there is risk, there must be choice. As far as we’re concerned, there is no medical emergency now, and there is therefore no justification for the declaration of medical emergency and the suspension of rights that has occurred with that reupping of the medical emergency by the executive branch. Another thing that the state of Florida has led on that we are very grateful for is enabling physicians [and providing] the latitude to provide early treatment to patients. We have really tried to advocate for the ability of physicians to just practice medicine.”

“I come at it, not from the public health perspective, but from the individual patient doctor perspective,” said Dr. Shveta Raju, M.D., MBA, Primary Care/Internal Medicine Department, Gwinnett Clinic. “It is very difficult when you are talking to a patient and between you there’s a mandate. It definitely has affected the relationship in so many ways. I would really hope that going forward we can refocus on meeting the patient where they are, understanding their concerns, answering their questions, focusing on their overall health, metabolic health, making sure that they’re getting routine preventive care that’s appropriate for their age, and their mental health. There’s definitely been good, better media attention on the mental health of children, but the mental health of adults has been greatly affected as well.”

“We’ve really had an inversion of the precautionary principle,” said Dr. Tracy Beth Høeg, M.D., Ph.D., Board Certified Interventional Sports and Spine Medicine Specialist, Northern California Orthopedic Associates. “I think that’s a great theme because it relates to school closures, lockdowns and masks. We know that masks interfere with communication, and children do not like wearing them. The children with hearing impairments and other impairments have difficulty wearing masks. And, we’re forcing them to do this just because we have this idea that they’re going to be doing something good. We have actually no high-quality evidence showing that they are.”

“At most 5%, based on a lot of the published data of COVID, was actually spread in schools,” said Dr. Christopher D’Adamo, Ph.D., Assistant Professor, University of Maryland School of Medicine. “So what we do know is the collateral damage was real with this, for both physical health and mental health. On the physical side we’ve seen, when you’re out of school, you’re not getting recess, you’re not getting physical education, you’re not getting sports, dance, just general movement from class to class. We have seen this likely contributed to the increases in BMI and obesity, a doubling of the increased rate of BMI during COVID. We’ve seen a doubling in some places of the incidents of new type two diabetes cases. When you have social isolation, when you’re away from friends, especially at such a formative age like that with even more screen time, we’ve seen increases in anxiety, depression, stress, which is one of the ultimate ways to impair the immune system is to be stressed. This has resulted in emergency department admissions for mental health related conditions.”

“In contrast to actually a lot, what a lot of the voices here [are saying], my perspective throughout the early parts of this pandemic were very different than theirs,” said Dr. Joseph Fraiman, M.D., Emergency Medicine Physician, Thibodaux Regional Medical Center, Slidell Memorial Hospital, and Lallie Kemp Regional Medical Center. “My views were wrong at that time because the states and nations that didn’t take aggressive COVID policies, they didn’t do obviously worse. It took me about a year into the pandemic before it became really clear that it wasn’t obvious at all that there was any policy that was strongly effective at reducing COVID. The scientist in me had to take this emerging data that I was seeing and acknowledge my hypothesis had been falsified.”

“If you have had immunity, you don’t need vaccines, and that by itself sort of reduces any argument for having a vaccine mandate or vaccine passports,” said Dr. Martin Kulldorff, Ph.D., Scientific Director, Brownstone Institute; Fellow, Hillsdale College’s Academy for Science & Freedom. “But for children who haven’t had COVID, the question was, we don’t know to what extent it helps, up against death and serious disease. Right now in the U.S., the Omicron wave is going down. Right now I think the benefits of vaccinating children are very small. We know that there’s a risk of myocarditis for young boys and young men, but also for girls. There might be other adverse reactions that we don’t know about yet. So for children, the benefits we know are at best, very small and we don’t know what the risk benefit ratio is. I think under those circumstances, it’s unethical to mandate vaccinations for children.”

“It seems to me that there’s been a sort of inversion of the schedule of uncertainty as I call it,” said Dr. Sunetra Gupta, Professor of Theoretical Epidemiology, Department of Zoology, University of Oxford. “Right from the start, everyone, all the powers that be were saying that these measures, lockdowns and other restrictions, will work. But the truth is we didn’t know whether they would work or indeed what the purpose would be, even if they did work, where was that taking us? The one thing we did know was that the measures we were proposing to implement lockdowns and other restrictions would have enormous cost. That was the one thing we were certain about. And yet that’s what we went ahead and did. So we inverted the precautionary principle of trying to minimize harm by doing the one thing that we knew would cause harm. Now we can say the benefit of hindsight is that the measures, in fact, didn’t do very much to slow down the spread and what we do see very sadly is that what we knew right at the start that these measures would cause harm that has in fact unfolded in front of us.”

“It’s interesting that there’s been a lot of misdirection from what we’ve seen,” said Dr. Harvey Risch, M.D., Ph.D., Professor of Epidemiology, Yale School of Public Health and the Yale School of Medicine. “We put out our scientific understandings and evidence, and then we get criticized on things that we didn’t say. I think part of the problem has been that what’s been purveyed to our society is plausibility, but not science. There’s a big difference between things that seem plausible and things that are scientific. And so lockdowns are plausible, but they’re not scientific. The scientific evidence as we’ve seen is how harmful they’ve been.”

“I’m just pleased to see the shift that we could now acknowledge that perhaps our children are not as resilient as we most often heard that they were,” said Dr. Jill Ackerman, M.D., Advent Health Shawnee Mission. “I hope that [with] this recognition we can move forward and prevent this from occurring in the future and recognize schools are essential. We really left that core principle in the dust over the past two years.”