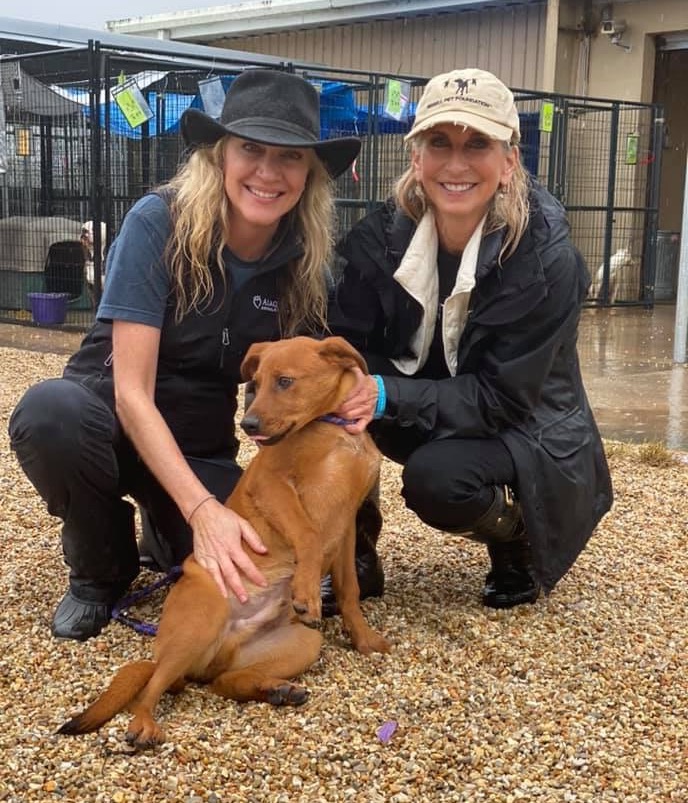 Hallmark Channel to Feature Alaqua Animal Refuge on Tails of Joy Show Alaqua Animal Refuge joined the Bissell Pet Foundation, along with nine rescue organizations from across the United States, to rescue 180 dogs in danger of euthanasia from St. Landry Animal Rescue in Louisiana this week. Rescue organizations came from states across the country including California, Michigan, Tennessee, and Florida. Cathy Bissell, founder of the Bissell Pet Foundation, organized the mission and Hallmark Channel’s Tails of Joy show was on site to document the process. Through Tails of Joy, the Hallmark Channel is hoping to bring about more awareness of animal rescue, transportation, and adoption. The show highlights the multiple processes it takes to run an animal shelter, from the physical rescue and transportation to the adoption, and everything in between. “I was born and raised in Louisiana, so Alaqua has been assisting that state and its animals for years,” said Laurie Hood, Alaqua founder. “The dedicated director of the shelter had put in her resignation because of the lack of support from the parish and all of the animals in the shelter were in danger of being put down. Some of these animals had been there for over a year.   Alaqua is currently conducting the medical needs of 28 dogs, which range from a cruelty case dog whose neck was embedded by a shoe string to heart worm positive dogs.   Alaqua’s Director of Operations Taylor Hood was also onsite in Louisiana and said “it was eye opening to see that these dogs were basically just existing in their kennels.” He stated further, “They made the long journey back to Florida and are already flourishing after just a day.”   Since the rescue happened in the middle of Louisiana during Mardi Gras festivities, Alaqua is hosting a special adoption event next weekend for the public to meet these animals and apply for adoption.   The event will take place Saturday and Sunday, March 7 and 8, from noon to five. Beginning at noon on Saturday, the event will feature the ‘Mardi Gras’ dogs with a Louisiana themed dog parade, and there will be giveaways for anyone adopting a dog!   “We knew that this was a special group of dogs who have been waiting years to find homes, so we just made this transport happen. Our emergency kennels were brought out and staff is prepared to work overtime,” said Laurie Hood. “We depend on donations to be able to save entire groups of animals like this, so all donations are appreciated.” Donations can be made at http://bit.ly/safc20   About Alaqua Animal Refuge Alaqua Animal Refuge is a no-kill animal shelter and sanctuary, located in the panhandle of Florida. As the Southeast’s premier no-kill 501(c)3 refuge and sanctuary, Alaqua believes that every abused, neglected and homeless animal deserves a second chance. Committed to providing protection, shelter and care to animals in need, this private, non-profit Refuge also offers a full-service adoption center, educational outreach, and community programs that extend far beyond their geographic location. Since its inception in 2007, Alaqua has become a recognized leader in animal rescue, welfare, cruelty prevention, and advocacy. Alaqua is currently in the midst of a relocation and expansion capital campaign to build a one-of-a-kind facility—the first in the United States—on 100 donated acres. The new facility and sanctuary will allow Alaqua to continue all of the important work that is done now, as well as be an educational and training center to empower others to help animals and recreate the model worldwide. To learn more, visit www.Alaqua.org