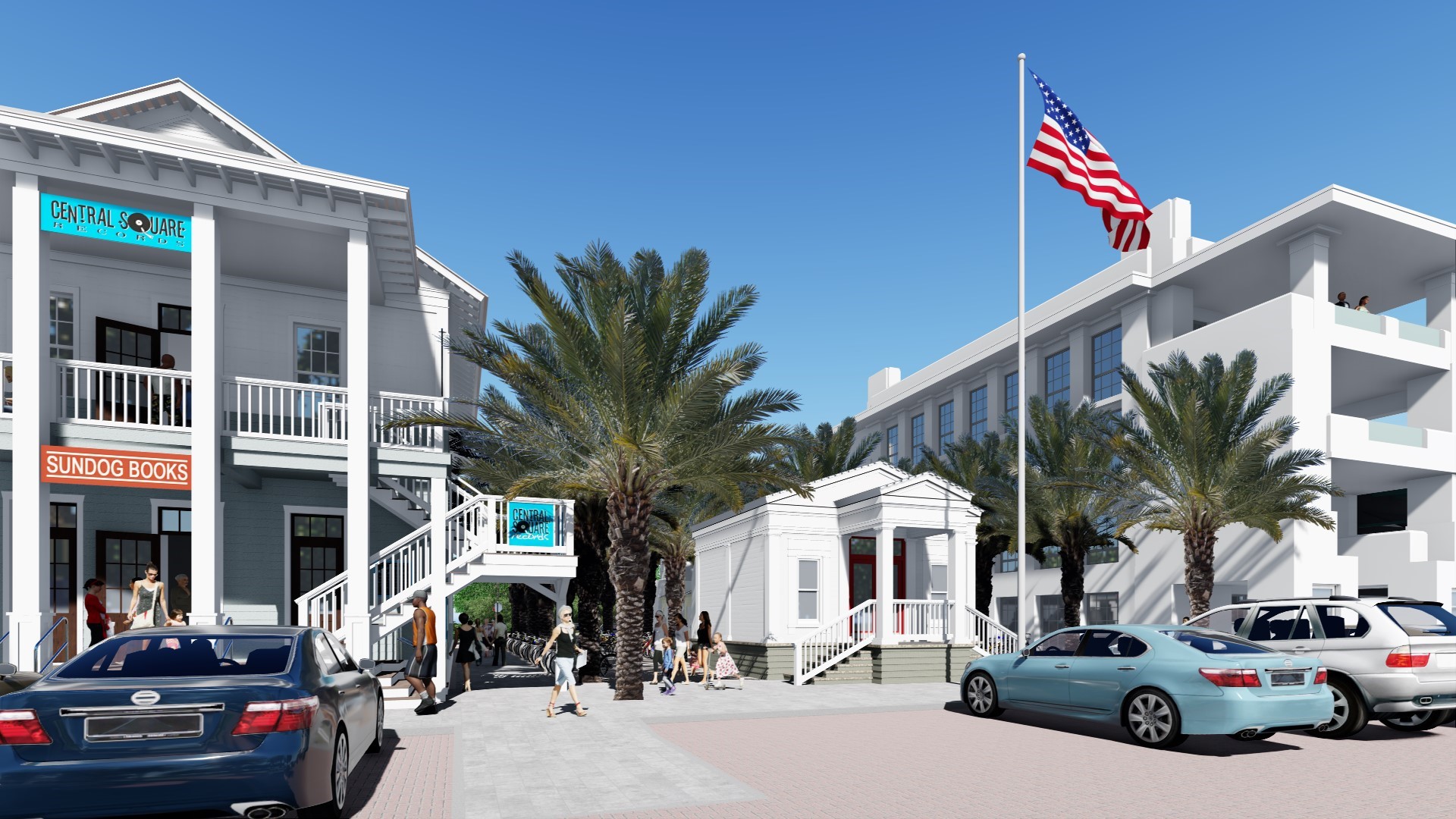 Seaside is excited to announce the beginning of a new Post Office Plaza. It is part of the vision of Seaside founders, Robert and Daryl Davis. “The plaza is the first project leading to the future construction of the Krier Tower,” said George Calvi, Seaside Director of Development, “and should take about six months to complete.” Located at the southern end of Seaside Avenue, the plaza will house the Seaside Post Office as well as seven new public restrooms and additional bike parking. “Unique in design, there will be four vernacular bathrooms contrasted by three infill platonic shaped structures – a play between the classical and romantic,” said architect and urbanist Dhiru Thadani. “The three pristine objects are handicap accessible restrooms. The plaza is planted with 22 stunning Medjool palm trees the same height as the ones around the Seaside Amphitheater. There will be additional head-in auto-parking in the front and rear with short-term reserved parking for Post Office customers.” The Krier Tower, an architectural landmark designed by renowned architect and urban designer Léon Krier, is one of several planned projects that shape Seaside’s long-term vision. “As an admirer of Leon Krier,” said Seaside cofounder Robert Davis, “it has long been my dream to bring to fruition the Krier Tower planned for Seaside’s town center, as well as creating a worthy civic space for the Post Office.” As outlined in Thadani’s book, Visions of Seaside, the idea for the Tower was included in the original plans for Seaside. The Post Office Plaza is the first phase in the realization of that dream. “Seaside’s urban spaces and civic buildings have provided gathering places that draw people to our community to learn, create and experience small town urbanity as well as life at the beach,” said Robert Davis. “The Post Office Plaza will enhance the experience of visitors and residents by creating a pedestrian park on one of the three axes leading from Seaside’s Central Square.   And, by freeing up space for the Krier Tower, the long-term vision for Seaside’s downtown will take one more step toward realization.” Attachments:  Photo and Caption: A groundbreaking was held at the site of the new Post Office Plaza on Tues., Nov. 14. Pictured are (left to right) Peter Horn III, Project Manager, Artisan of Seagrove Beach, Inc.; Pat Day, Seaside Postmaster; Dhiru Thadani, Architect and Urbanist; Pam Avera, VP and General Manager; George Calvi, Seaside Development Director; Peter Horn Jr., President, Artisan of Seagrove Beach, Inc.; and Trey Dorsey, Director of Property Management.  About Seaside Seaside, built on 80 acres on Northwest Florida’s Gulf Coast, is located on South Walton County’s Hwy. 30-A. Acclaimed world-wide as one of the iconic examples of New Urbanism, Seaside offers a thriving town center with shopping and dining, all within walkable distance to homes, cottages and offices. Consisting of more than 380 homes, many of them vacation rentals, the community offers 18 restaurants and eateries, and 44 shops, galleries and services. Seaside is included on Cooking Channel’s Emeril’s Florida, Business Insider’s “18 of the most beautiful public spaces in the world,” according to urban designers, PBS “10 Towns that Changed America,” one of Trip Advisor’s 2016 “15 Rising Vacation Rental Destinations,” Travel Channel’s “2015 Best Family Beach,” named Travel + Leisure’s “Best Beach on Earth” for families (2014) and included in USA Today’s “Top 10 Best Beach Towns in Florida (2013) by “Dr. Beach,” to name a few. The holiday town was also the primary filming location of the classic movie “The Truman Show.” Seaside is a prominent topic in architectural schools and housing-industry magazines, is visited by design professionals from throughout the United States, and is included in the American Institute of Architects (Florida chapter) list of Florida Architecture: 100 Years 100 Places. For more information about Seaside, please visit www.seasidefl.com 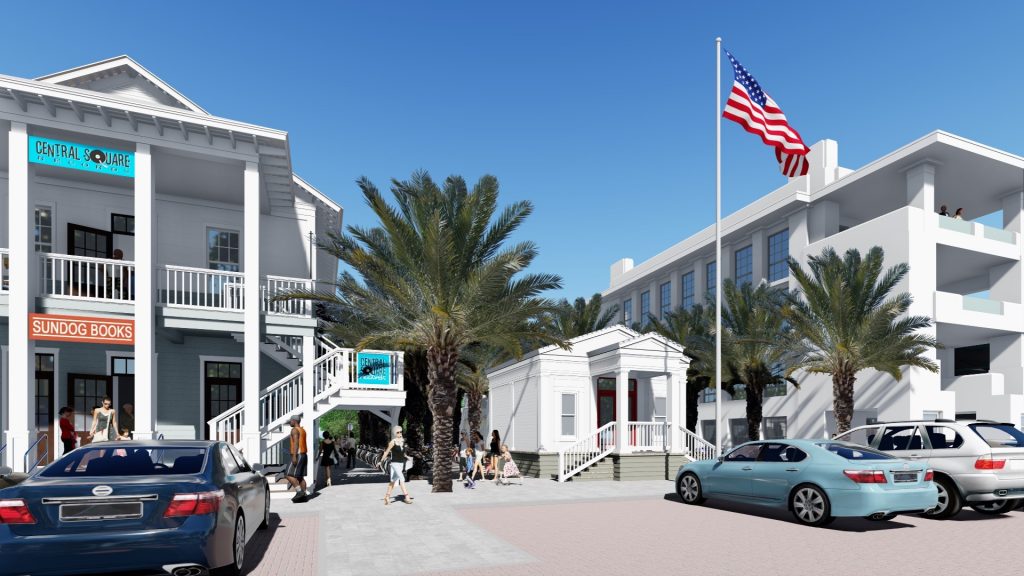 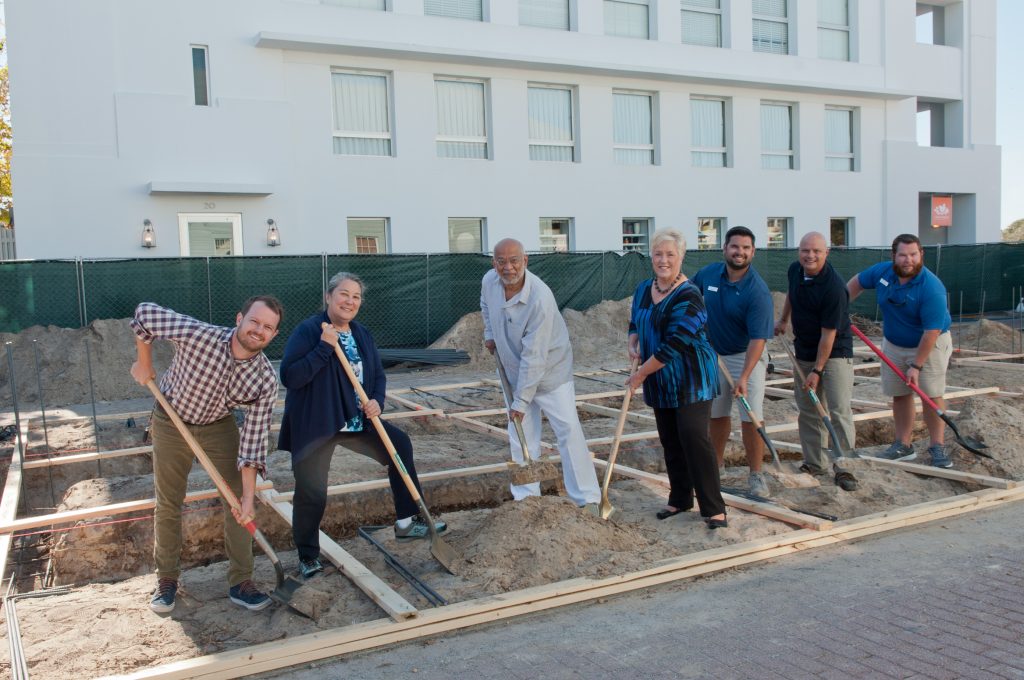 The Perfect in South Walton Awards